Soil Classification: Why is it Important?

Generally, soils are formed by the mechanical or chemical weathering of rocks and are primarily defined by their particle size and mineral content.   Soils that are located at the place they were formed are referred to as residual, whereas soils that have been transported elsewhere can fall under several different groups.  How do soils end up elsewhere? They can 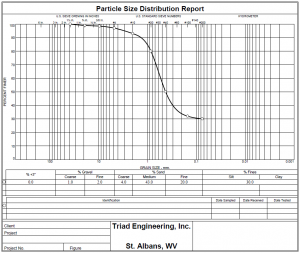 move with the help of glaciers, streams, lakes, seas, wind or by landslides.

There is a system called the Unified Soil Classification System (USCS) that classifies soil by grain size.  Granular soil is made up of gravels and sands.  Gravels are particles of rock that are greater than 4.75 mm.  Sands are particles that fall between 4.75 and 0.075 mm.  Fines are defined as soils that are less than 0.075 mm and are made up of Silt and Clay.

Silts are a mixture between grains and flake shaped minerals.  Clays are mostly flake shaped minerals that bond together with the introduction of water.  Cohesion is the common attraction between the particles that holds onto moisture and gives the soil strength.  The mineral type and water content in fines cause them to develop low to high plasticity (the higher the plasticity, the more like putty it becomes).

The purpose of a soil classification from an engineering standpoint is to determine properties such as permeability, shear strength and compressionability.  Soil classification allows engineers to determine its potential behavior. Structures, roadways, bridges, and other developments must be built on soil suitable for its needs.